How to Handle a Tree Uprooted Due to a Storm 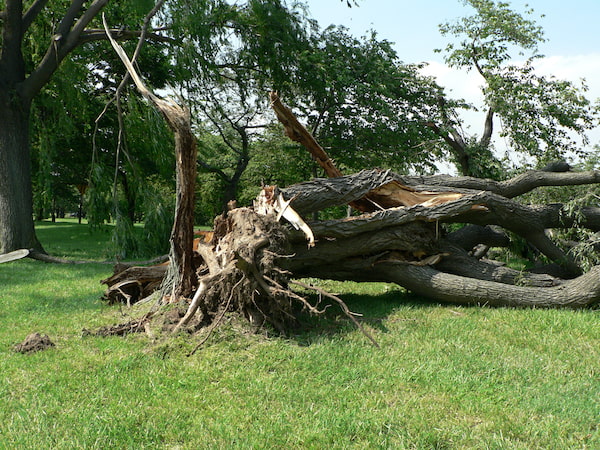 After major storms, the snarling sound of chainsaws can be heard throughout the neighborhood as emergency workers and homeowners cut up downed trees.

Wether you have property that hasn’t had any Clermont land clearing done to it or you have a home on your property, having an uprooted tree still needs to be dealt with.

Contact a tree service Clermont FL if you find that you need an uprooted tree removed.

Just as lot/land clearing for a new home

Strong winds topple trees that don’t have a healthy, well-developed root system to anchor them in place. Contrary to popular belief, most tree species don’t have big deep tap roots directly beneath the trunk. Instead, trees have shallow anchor roots radiating out from the trunk.

The anchor root system consists of perennial woody roots that grow out horizontally in the top foot of soil, and perennial vertical anchor roots descending a couple feet or more into the soil from the horizontal roots.

Short feeder roots grow out from the perennial anchoring roots to collect water and nutrients for the tree. The root system radiates out from the tree for a distance about equal to the tree’s height.

To provide solid anchorage for a large long-lived tree, the root system must be distributed evenly around the tree and be free of structurally weak areas. Wind-thrown trees are believed to be the result of poorly distributed roots from soil or climactic factors that restricted root growth on one side or another, or inadequately developed root systems because of generally poor growing conditions.

Can an uprooted tree be replanted?

If a large tree has been uprooted there’s very little we can do to save it. These extensive root systems draw water and nutrients from the soil. So not only does uprooting create significant damage to the system but the roots may not get sufficient nutrients to continue the growth of the tree once it’s been upright.

If it’s a smaller tree that doesn’t have such a massive root structure, it could be replanted as long as you pack soil around the exposed roots and give it plenty of water. Once the smaller tree has been replanted you have to give it additional care. Prune any broken branches but don’t remove any more than necessary. Avoid fertilizing the tree during the healing process as it can actually damage the roots further. You want to wait until the tree has established a new growth system before adding fertilizer or pruning again to regain its shape.

Call Today for your FREE QUOTE

The Best Way to Deal with Storm Damaged Trees

Obviously, you know if you have a damaged tree but if you have several acres, it’s important to walk your fence line or the property boundary line after a major storm to check for any damage. Verify if any trees are an immediate hazard such as landing on a vehicle, building, someone else’s property, or damage to animals or fence lines.

• If you are unsure when to ask for help, here’s a good rule of thumb:
• If a branch has been pulled or split out of the tree
• If more than 50% of the branches in the crown of the tree is broken or missing
• If the tree is leaning with evidence of root lifting or breakage
• If there’s a large crack in a tree affecting 50% or more of the main trunk
• If the tree looks like it could be a danger to animals, fence lines, vehicles or property

As much as you probably want to take care of yourself, this could be a hazardous situation. You never know if the tree is going to split further, sending shards of wood in all directions or uprooting the tree further trapping or pinning parts or all of you. Bracing or cabling a tree is usually not recommended but it should be done by a professional, especially on valuable trees that you might want to keep.

3. Try not to panic and remove all of your trees.

Just because one tree fell or split, doesn’t mean they all will during the next storm. Consider environmental factors anesthetics and talk to a professional before implementing the all or nothing mentality.

Many people try the inexpensive or cheap options such as using their neighbor’s chainsaw or removing hazardous limbs yourself, but without proper tree care knowledge, you could add more damage to the tree or surrounding property or worse yet, yourself.

If the time comes where you have the storm damaged trees, give us a call at Tree Service Clermont(link to homepage). We specialize in storm clean-up and proper removal or protection of trees on your property.

CONTACT US TODAY FOR EXCEPTIONAL, AFFORDABLE, AND PROFESSIONAL TREE SERVICE